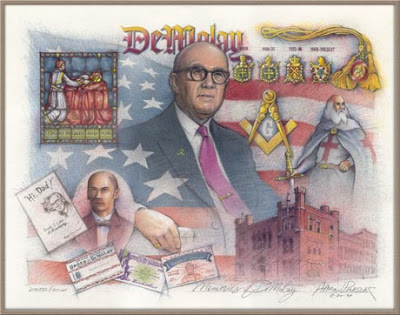 Lessons of the knightly virtues of chivalry like bravery, honor, honesty, faith, charity and humility never go out of style, and they retain their attraction for every generation – especially when they are imparted with the idealistic romance of an earlier Age. The legendary order of the Knights Templar is unquestionably one of the very strongest and most enduring images of faith, honor and courage.

March 24, 2019 marks the 100th anniversary of the official launch day in 1919 of DeMolay International (formerly the Order of DeMolay) by Freemason Frank S. Land in Kansas City, Missouri. Named after Jacques de Molay, the famed last Grand Master of the Knights Templar, DeMolay International is a chivalric youth group associated with Freemasonry, specifically for young men between 12 and 21. Based on the seven cardinal virtues of filial love, reverence, courtesy, comradeship, fidelity, cleanness and patriotism, DeMolay International has in its first century encouraged more than a million young men to become leaders of character, including many successful businessmen, public servants, entertainers and athletes.

A century ago, Frank Land was very concerned about boys who had lost their fathers during World War I. In 1919, 17-year-old Louis Lower and eight other boys gathered together in Kansas City, Missouri, to create…