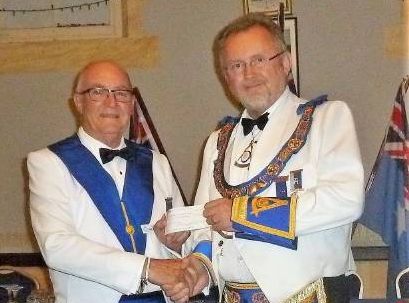 Last Thursday opportunity was taken by Eric Meacock, secretary of Nannup Day Lodge of Freemasons to present a cheque for $200 to the most worshipful grand master Peter Kirwin, who in his capacity as leader of Freemasons in Western Australia, recently took the initiative of nominating himself for the St. Vincent de Paul Society WA Inc. CEO Sleepout, where funds are raised for homeless persons throughout the state.

His nomination read: “One night isn’t a lot, but it can make a whole lot of difference. Freemasons are often portrayed as coming from the higher end of society but it could not be further from the truth. The membership of our Society comes from all walks of life and one of our core beliefs is chartiy and to help others who are less fortunate than ourselves. As the newly appointed leader of Freemasons in WA I could not think of a better way than to lead by example and get involved with the Vinnies CEO Sleepout. The regalia I wear as grand master is based on…