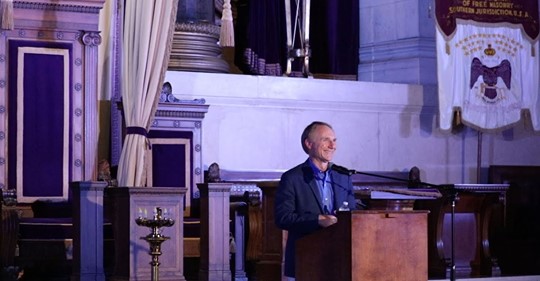 Author Dan Brown was invited to speak at the House of the Temple in Washington D.C. during the Scottish Rite Southern Jurisdiction’s biennial meeting over the weekend. He posted this photo on his Facebook page on Tuesday.

For those of you who were hiding under a rock in the early 2000s (or weren’t born yet – a chilling thought), Brown’s art- symbolism- and history-laden thrillers The DaVinci Code and Angels & Demons were worldwide publishing phenomenons that motivated untold throngs of readers to discover the Freemasons, the Knights Templar, the Illuminati, and a myriad of other esoteric topics. Almost overnight, Scotland’s Rosslyn Chapel was overwhelmed with tourists. Tour busses began cruising through the French village of Rennes Le Chateau. And internet enquiries started to come in to Masonic lodges and grand lodge…