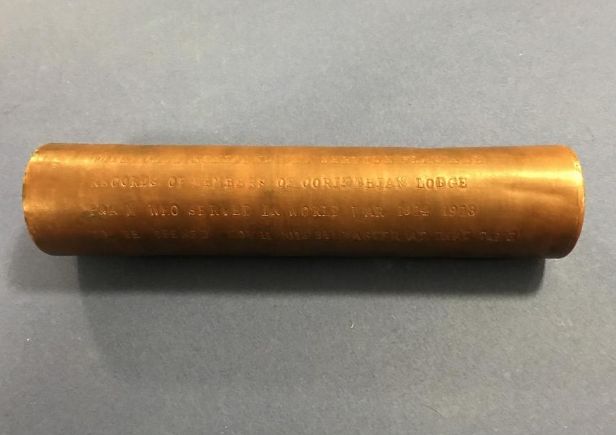 Concord is a town known for its history, but Doug Ellis of the Concord Corinthian Lodge recently found an artifact impressive even by Concord’s high standards.

While assisting a fellow Freemason named Edwin Hancock from a chapter in Dublin, Ireland, on a research project about the 1918 sinking of the RMS Leinster, Ellis said he found a reference to a time capsule, hidden in the Concord lodge, meant to be opened this year.

“I went into the meeting minutes and found that, in 1920, they gathered in a circle. They retired the service flag and they had a little ceremony for those who were lost in the war and they put together this little time capsule to be opened in 2018,” Ellis said.

And with that, the hunt began, according to Ellis.

“We started looking and there was this place in the dining room where there was this hole kind of in the floor that was tiled over, but it was sort of at this diagonal, and it had this sort of hook on it, but it hadn’t been opened in years,” Ellis said. “So I get my sledgehammer, went in there, smashed that thing open, ripped it up and found an old sewer pipe.”

So that was a dead end, but Ellis kept looking, and the chase took him to the library cabinets upstairs in the lodge, but he found…