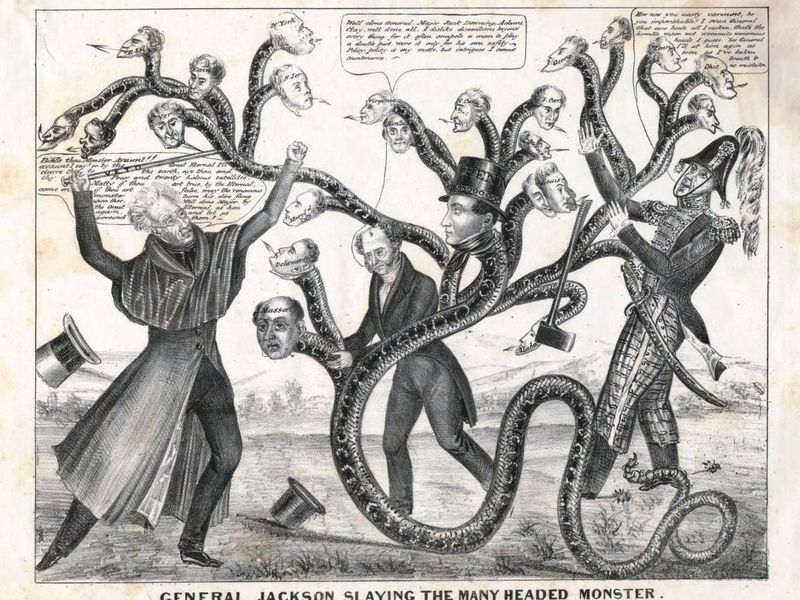 From claims that NASA faked the moon landing to suspicions about the U.S. government’s complicity in the assassination of John F. Kennedy, Americans love conspiracy theories. Conspiratorial rhetoric in presidential campaigns and its distracting impact on the body politic have been a fixture in American elections from the beginning, but conspiracies flourished in the 1820s and 1830s, when modern-day American political parties developed, and the expansion of white male suffrage increased the nation’s voting base. These new parties, which included the Democrats, the National Republicans, the Anti-Masons, and the Whigs, frequently used conspiracy accusations as a political tool to capture new voters—ultimately bringing about a recession and a collapse of public trust in the democratic process.

During the early decades of the American republic, the Federalist and Jeffersonian Republican Parties engaged in conspiratorial rhetoric on a regular basis. Following the War of 1812, the Federalist Party faded from the political landscape, leaving the Republicans as the predominant national party. Their hold was so great that in 1816 and 1820, James Monroe, the Republican presidential candidate, ran virtually unopposed, but in 1824, the Republicans splintered into multiple and disparate factions. Five viable candidates ran in that election cycle, and John Quincy Adams won the presidency.

The controversy around Adams’s victory quickly fueled suspicions: Tennessean Andrew Jackson had won the most electoral and popular votes and the most regions and states, but because he did not win the majority of electoral votes, the U.S. House of Representatives was constitutionally required to choose the president in a runoff of the top three vote-getters. Jackson’s supporters believed that House Speaker Henry Clay, who had placed fourth in the regular election, helped Adams win the House election in return for being appointed secretary of state. The Jacksonians’ charges of a “corrupt bargain” between Adams and Clay ensured that the 1828 election would, in part, be fought over…