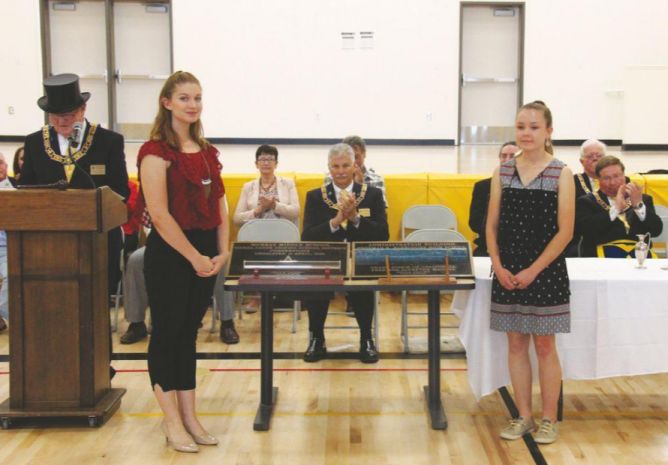 With much pomp and ceremony, the Free and Accepted Masons of California held a cornerstone ceremony at the Murray Middle School gym on Wednesday.

The ceremony celebrated the end of major construction at Murray and Burroughs High School by donating a ceremonial cornerstone to the new Murray campus and to the Burroughs new administration building. The masons also gave two $1,000 donations — one to each school.

The event began with the freemasons walking from the back of the gym to the front with two masons on either side of Grand Master Bryce Galloway. The two held poles over Galloway in a diagonal formation, so that it looked much like the compass of the Freemason symbol. An informational page of the event’s program referred to Galloway as “Most Worshipful Bruce Robert Galloway.”

A time capsule of items chosen by the students will be placed under the cornerstone.

Among the items in the Burroughs capsule will be a 2016-2017 yearbook, a copy of the Blockbuster school newspaper, sports jerseys, and so on.

Among the items in the Murray capsule will be school t-shirts, photos of the school from 1945 to present, photos of each class, spirit sleeves, a school pen, a note from one student to another, and so on.

The local Masonic Lodge, Indian Wells Valley Masonic Lodge #684, added some items of their own. Whoever or whatever opens the capsule in the future will find information about the lodge and a CD with some pictures of Masonic symbols to look at.

“We will now place the capsules beneath the plaques where, after the ceremony, they will be deposited in their proper place. And may the great architect of the universe, in his wisdom, grant that ages upon ages shall pass away ere it be seen again,” Galloway said.

Galloway then requested three of his Masonic brothers come to check the quality of the ceremonial cornerstone plaques.

“What is the jewel of your office?” he called to them.

One by one, they stated the jewel of their office. Their jewels were…