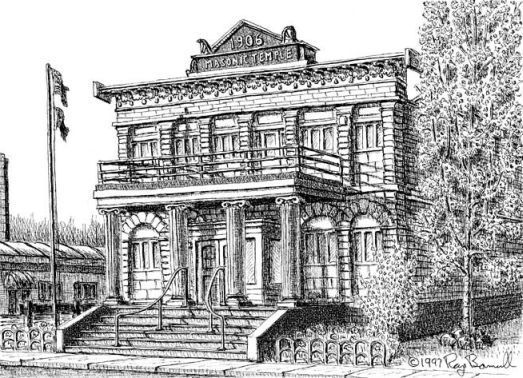 The Masonic Temple at 809 First Ave. is seen in 1997 when it was still being used by the Masons.   (Ray Bonnell sketch)

FAIRBANKS — One of the most iconic buildings along the Fairbanks riverfront, the 112-year-old Masonic Temple at 809 First Ave., was demolished this past March 17 after a portion of the roof collapsed. So died a unique piece of Alaska history dating back to the founding of Fairbanks.

Fraternal organizations were popular in Alaska’s fledgling towns. The Arctic Brotherhood, Eagles, Elks, Freemasons, Moose and Odd Fellows were all represented. According to the 1921 edition of “Mackey’s History of Freemasonry,” by the 1920s seven chartered Masonic lodges existed in Alaska. Freemasonry arrived in Fairbanks soon after the city’s founding, and although the local chapter (Tanana Lodge) did not receive its charter until 1908, the men who started the lodge were active Masons before the local chapter was officially recognized.

National Register of Historic Places documents state that the building that became the Freemasons’ home was constructed in 1906 as the Tanana Commercial Company store. Two years later the Masonic Lodge purchased the structure. The Masons added a basement and constructed an extension to the rear and a second story.