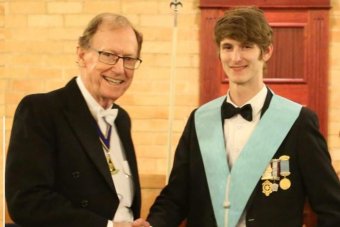 The historically “secret society” of the Freemasons has been mired in conspiracy theories and controversy for years, but young Australians are looking past that and choosing to become part of the fraternity.

In the past, the Freemasons’ initiation process was highly secretive.

Members had to be approached to join, had to meet certain criteria, and a guard stood outside lodge meetings to ensure only male members could attend.

Freemason Alec Ayling, in South Australia’s Riverland, said it had been daunting attending his first meeting.

“If you were to join, you were blindfolded before you came in and you’re conducted around certain areas and had things explained, and then you’re sort of brought to light,” he said.

Since declining membership has led to fraternities closing, rules around membership have evolved from being secret and at times discriminatory to being advertised as welcoming people from all walks of life.

Grand lodges in Victoria and New South Wales have pointed to social media campaigns as the success behind recruiting new members.

Several have reported a 10–15 per cent increase in young people aged between 18-30 joining their group.

In the Grand Lodge of South Australia and the Northern Territory, 75 per cent of its 115 new members over the past year were in the 20–30-year-old age…