Freemasons visit the hospice in Gandia 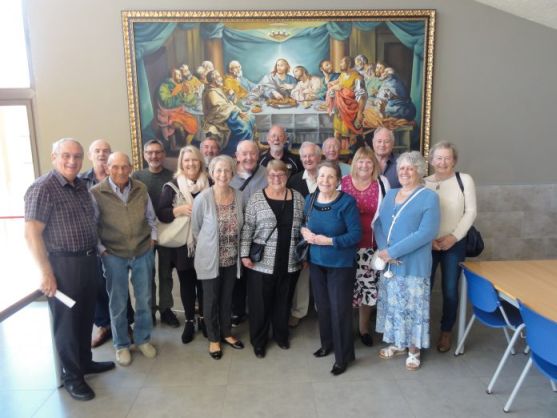 Local Freemasons visit the Franciscan hospice and refuge in Gandia.

Brethren of local Lodge, Oliva La Safor along with their wives recently visited the Franciscan Men’s Refuge in Gandia to see for themselves how the refuge is run and how the money and gifts raised by the Lodge are being spent and distributed.

The Masons did not arrive empty handed! Each brought at least one, and in some cases several, bags of food, clothing and shoes all of which are sorely needed by the refuge. The visit was arranged by the Charity Steward of the Lodge, WBro Jim Jordan and Mr Stephen Carden, a local representative of the Church of England, who regularly visits the refuge and helps out, along with his wife, Linda, in numerous ways. During this visit he acted as both guide and translator and made an excellent job of explaining how the place is run and what magnificent services they provide.

The Franciscan Hospice at Palma de Gandia provides a home and nursing care for around fifty-five homeless men, many of whom suffer from mental or physical illness. Some are terminally ill. These men would otherwise be on the streets and unlikely to survive without this special care. Admission is solely on the basis of need. All nationalities and all religions (or none) are accepted.

The hospice is funded entirely by charitable donations, not a cent is received in state aid. Three Franciscan Brothers, (Hermano Guillermo, Hermano Pepe and Hermano Martin) assisted by local volunteers, care for the residents around the clock, every day of the year.

Stephen and Linda Carden coordinate the efforts of all English speaking supporters and were most helpful in providing much of the information written here..

This wonderful place is a refuge of love and charity. When there is so much bad news in the world, a visit here restores your faith in human nature. It is hard to explain to people who are familiar with the UK system of social security what the Hospice actually does. Traditionally in Spain, disadvantaged people have been cared for within their family.

The state provision is limited to people who have worked and paid their social security contributions. The Hospice cares for men who, through no fault of their own, have fallen out of the system. Many were abandoned by their families and have never worked, others suffer from severe mental health problems..

Although it’s called a Hospice, it’s a hospice in the Mediterranean sense. Not all the residents are terminally ill, although some are. It’s a cross between a UK hospice, a nursing home and a refuge for the homeless. Some of the residents are long term, others come and go. Not all vagrants want to stay. Some come for a shower, a change of clothes, a square meal and a bed for the night, then move on.

The Brothers are chronically short of funds to keep the doors open. They need around five thousand euros a month just for their regular bills; but they are always cheerful and resilient. Unpaid bills are put under the statue of St Francis, in the hope of divine assistance!