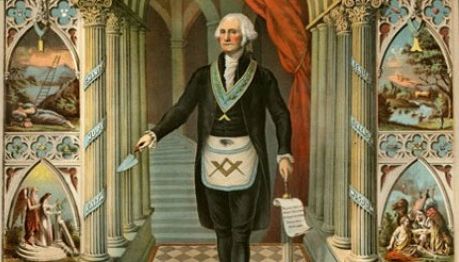 Since 2011, the brethren of Mt. Nebo Lodge 91 in Shepherdstown, West Virginia have graciously permitted their 234-year old George Washington Masonic apron to be displayed to the general public during President’s Week each February at Washington’s Mount Vernon Estate in Virginia.

Young George Washington was initiated, passed and raised as a Freemason at the Lodge of Fredericksburg, Virginia between 1752-53. According to the story provided by the lodge, after the end of the American Revolutionary War, the Marquis de Lafayette allegedly presented his friend Washington this French-made silk Masonic apron while visiting Mount Vernon in 1784. The hand-embroidered apron features a square and compass, the crossed flags of France and the new United States, a memento mori, sprigs of acacia, and a tessellated cable-tow tied with three knots, referred to by French Masons as la houpe dentelee, which represents the mystic tie that binds all Masons in brotherhood.

(American Masons who visit lodges overseas will see this knotted rope symbolism tied with ‘love knots’ or ‘infinity knots’ commonly stretched all around lodge rooms, and it is strongly allied with the ‘Chain of Union.’ Brother Steve Burkle has written an excellent paper on this symbol and its relationship with the ‘indented tessel’ referred to in Preston-Webb ritual working. See it HERE.)

After Martha Washington’s death in 1802, this apron is believed to have been purchased for six dollars from her estate by…