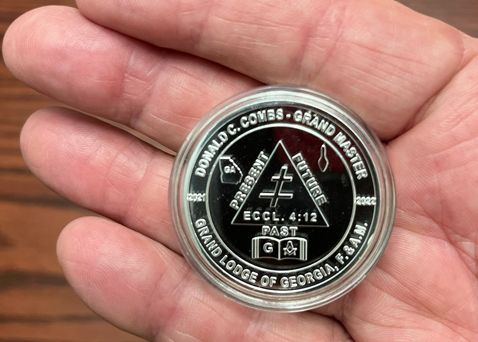 At the July 26th meeting of the Beulah Lodge #698, Grand Master of the Masonic Lodges of Georgia Donald C. Combs presented Roger Leggett with a Silver Commemorative Coin. The esteemed coin is one of only 75 given in the State of Georgia. Roger has been presented the coin due to his ingenious invention of Chad’s Bracket. The GrandMaster was familiar with the wagon because of his own family member who used a wagon at CHOA. The origins of Chad’s Bracket are as bittersweet as any history could possibly be. In 2011, Roger’s granddaughter Felicity was diagnosed with a brain tumor. What followed was a roller coaster of medications, MRIs, chemo, and surgery.

During one of the many visits to see Felicity in the hospital, Roger and his son, Chad Leggett (Felicity’s uncle, an EMT with Puckett Ambulance at CHOA) encountered the mom of a patient entering an elevator. That mom was using a wagon to transport her child while also attempting to move an IV pole along with…