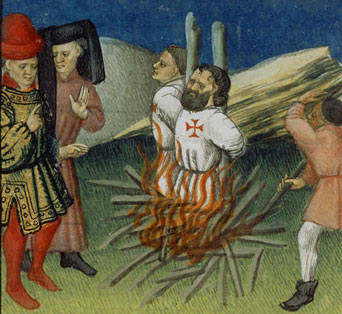 1) Who were the Knights Templars?

3) How and when was that date avenged?

The origin of knighthood is lost in the dim past. In early England, a knight seems to have been a youth who attended a member of the court; it was a position of honor and of service and might lead in time to Royal recognition and rank. In Germany, the early knight may have been regarded much in the same way, a disciple. In both countries the knights were obviously ambitious and high-spirited youths as one might expect. It was in France, however, that the idea of chivalry arose, and this conception quickly spread throughout Europe. Some knights had made themselves useful to Earls or Bishops, that is the principal landlords and magnates and military chiefs of the realm and might be classed as superior civil servants in times of peace, becoming leaders of the armies, both secular and religious, in times of war.
There were, of course, many foot-loose knights wandering about Europe in quest of adventure, but on the whole a knight was a responsible link in the Feudal chain reaching from the king to the peasant. In time the ideal of chivalry came to prevail, and the high honor accompanying it seems to have derived from prehistoric Teutonic custom. The candidate had to submit to a rigorous investigation of …