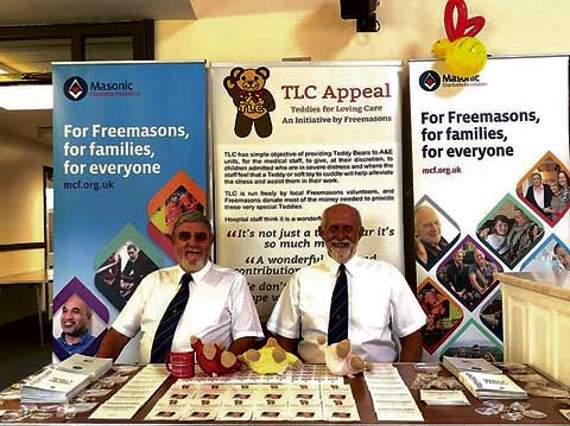 Graham Shepherd-Jones, Worshipful Master and Peter Reeve, Charity Steward at the display in the Parkhouse Centre.

Last year the members of Granville Lodge No 3405, which meets in Bude, opened their Masonic Hall to the public as part of their celebrations of 300 years of the United Grand Lodge of England.

The event proved to be a great success so the hall was opened again on Sunday, July 29 to coincide with the Bude and Stratton Heritage Festival.

The original plan was to have an outside display as well as opening the hall but with bad weather predicted the heritage festival organizers took what proved to be the sensible decision of moving the various organizations into The Parkhouse Centre.

Members of the public showed considerable interest in the display which was set up by the provincial communications co-ordinator, Phillip Lakin, who had traveled from Truro to support the members of Granville Lodge.

Following a brief explanation of the aims and objectives of Freemasonry and being given various explanatory documents people were directed the short distance to the Masonic Hall where they were shown displays of regalia and given details of the numerous charities supported by the lodge.