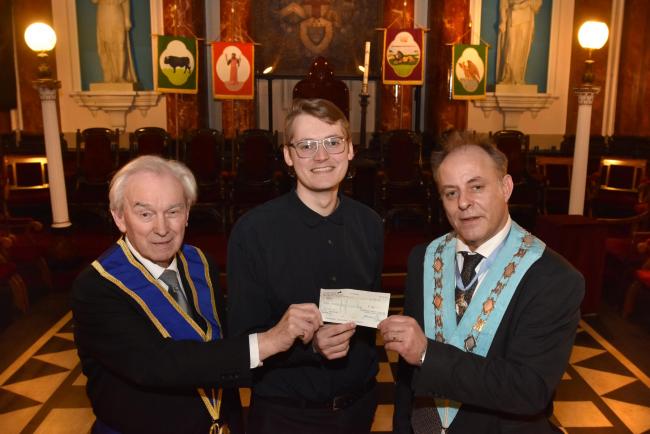 YORK’S Freemasons dug deep into their pockets this week for the York Blind & Partially Sighted Society.

The worshipful master of the York lodge, Michael McCloud, and the director of ceremonies, Michael Jeffery, from the Masonic Hall in Duncombe Place, made a presentation of £720 on Thursday(April 5).

Mr McCloud said: “Masonry today is a great organisation that supports many charities all over the UK, including St Leonard’s Hospice, the air ambulance and Snappy [which works with children and young people with a range of disabilities in York].”

Edvards Banka, client services assistant at YBPSS, who received the cheque on behalf of the society, said: “We are very grateful for the support of the charitable fund.

“This money will be used to support our increasing work with children and young people in York who have a visual impairment.”

In total, charities around the region have received a total of £41,733 from the Freemasons of the North and East Ridings in the past 12 months.

Across the whole of the UK the total raised in the past five years was £75 million.

Mr McCloud said: “The stigma of freemasonry is disappearing due to …