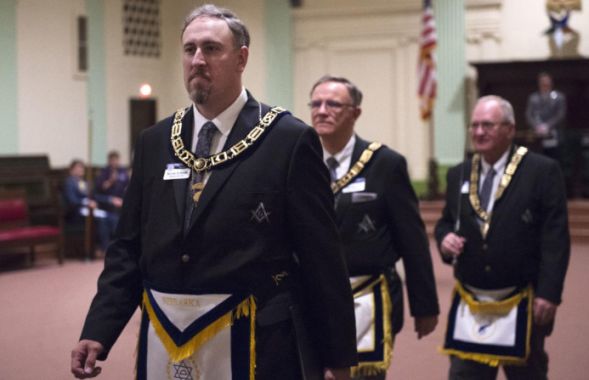 Lincoln Lodge No. 19 celebrated its 150th anniversary Sunday at the Masonic Temple with a ceremony and reception.

The ceremony was a rededication to freemason values, said Lodge Master Dick Clark. These values are based on the code of ethics of the stonemasons who built King Solomon’s temple.

The Lincoln Lodge No. 19 masons first met in the upper rooms of a hardware store, according to a report by grand historian Russ Reno. The lodge has met in six different locations since it was chartered.

The first Masonic Temple of Lincoln was built in 1884 and destroyed in a fire in 1899.

The current Masonic Temple, which is on the National Register of Historic Places, is made from silverdale limestone from Kansas. The same stones were used for the State Capitol building, Reno said.

The two buildings were both completed within years of each other and designed in Art Deco style. Because of their similarities, Bob Ripley, capitol administrator for Nebraska Capitol Commission, considers the building “the little brother” to the State Capitol, Lodge Senior Warden Will Folsom said.

The temple is currently undergoing renovations and restoring its Elizabeth Dolan paintings. Dolan is a Nebraskan artist whose work is also featured in the Capitol. The lodge will open the temple to the public so people can view the paintings this summer, Reno said.

Lodge No. 19, which counts John J. Pershing and William Jennings Bryan as notable past members, sets itself apart from …
read more at Lincoln Journal Star website