The Symbolism of the Cube: Why is it both Qabalistic and Masonic? 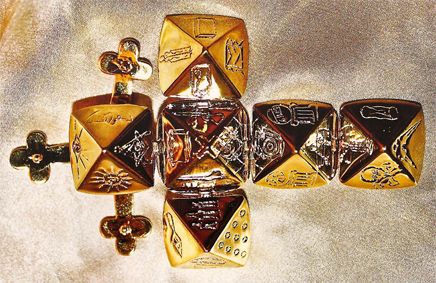 more about the picture: The Lost Symbol’s Masonic Stone Cube

Symbols can often have double or multiple interpretations, ranging from the obvious exoteric meanings to the more esoteric ideas understood by a few. Somewhere in the middle of these two extremes can be found the hidden knowledge. Symbols conceal as much, or more, than they reveal.

Where does the masonic cube fall on this continuum? How did the hidden knowledge of the mystical qabalah influence its use in Freemasonry?

To start with, what is Qabalah? It’s difficult to define with a phrase. Even after a few decades of study I don’t think I can come up with a definition. How can you describe the indescribable?

Perhaps one could say the Qabalah is a mystical symbolic system of looking at the microcosm and macrocosm from the standpoint of the Creator. For a qabalist, there is nothing in life that is not interesting; the speck of dust on the ground, the glowing nebulas in the heavens, and the tiny living cell — all these have their message and tell a story of the Creator.

Can masons relate to this? Of course. That is why most of the early 18th century English ritualists were acquainted with the qabalistic teachings. Since many of them studied the qabalah while the masonic rituals were being written, it was likely a source for many of the signs, symbols and allegories of Freemasonry. Brother Albert Pike 33° indexed over seventy entries to the subject of qabalah in his book Morals and Dogma. cabala21

The book indicates that…