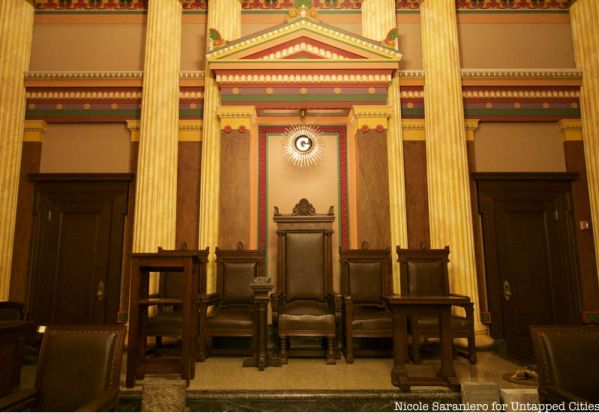 Freemasonry is a historic fraternal order that has been shrouded in mystery for centuries, but it turns out, the masons are pretty open to letting you in on a few of their secrets. Untapped Cities Insiders recently got to tour the Masonic Hall and Grand Lodge of Free and Accepted Masons in Chelsea where they learned the history of this organization and were guided through the many intricately decorated lodge rooms by brothers in the order who were more than willing to shed light on the not-so-secret-society.

There are many places around New York City where masonic influence can be seen, but the Masonic Hall on 23rd street serves as the headquarters for the entire state of New York. This two building complex made up of commercial and masonic spaces serves is home to over sixty masonic lodges, or groups who meet there regularly. The Hall was built in 1910 by architect Harry P. Knowles, who was a Master Mason. The meeting rooms underwent a major restoration in the mid-1980s through the 1990s by…