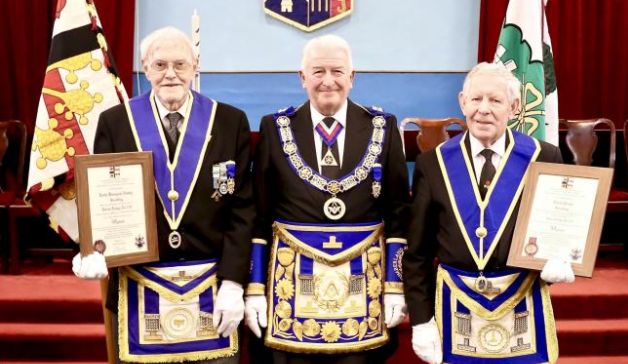 “Two well-known and loved brethren” have celebrated their golden jubilee in Freemasonry.

More than 60 Masons gathered at Kendal’s Union Lodge 129 to mark the achievement by lodge members Keith Newby and David Poole.

“Fifty-year celebrations are quite special, but for two to come at once is very rare,” said Brian Ferrington, communications officer for the Freemasons’ South Westmorland group.

Mr Newby and Mr Poole were thanked for their “dedicated service” by Norman Thompson, provincial grand master for Cumberland and Westmorland, and deputy lieutenant of Cumbria.

Kendal-born Keith Newby began his working life in 1950 at Gilbert Gilkes and Gordon as an apprentice engineering draughtsman, and became a time-served design engineer. He had been educated at St George’s Church of England School, now the home of Union Lodge, and later the Allen Technical College just around the corner.

After Gilkes, Mr Newby joined the Merchant Navy as an engineer officer serving in the Persian Gulf, South Africa and the Far East.

In 1959 he returned home, joined the family removals firm and wed his wife Thalia. Married for 58 years, they have two children and six grandchildren.