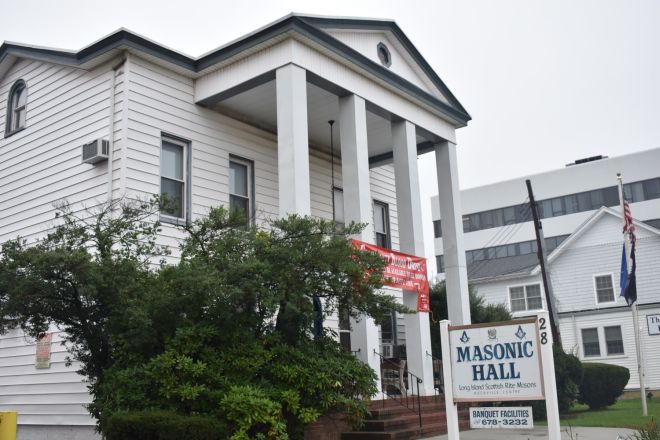 The building at 28 Lincoln Ave. houses the Valley Masonic Historical Society and the Scottish Rite, an offshoot of Freemasonry.

The building, which welcomes visitors with tall columns and a gold-colored door knocker, dates back to the 1850s and houses the Valley Masonic Historical Society and its new museum. Members of the Scottish Rite, a branch of freemasonry first established in 1801 in South Carolina, use the space to continue instilling the values of the fraternity.

Former Grandmaster Bob Stack, of Hewlett, who became a freemason in the 1960s, joined the Rockville Centre lodge about 10 years ago and has served as its secretary ever since. “We teach morality through the use of masonry tools,” he said.

The exact origin of freemasons is unknown, but many scholars think they arose from the stonemasons’ guilds in the Middle Ages. In 1717, four lodges in London formed the first Grand Lodge of England, and freemasonry later became popular in colonial America, where it spread ideas like the liberty of the individual, freedom of religion, the formation of democratic governments, and the importance of public education.

Over the years, freemasonry developed into a worldwide…