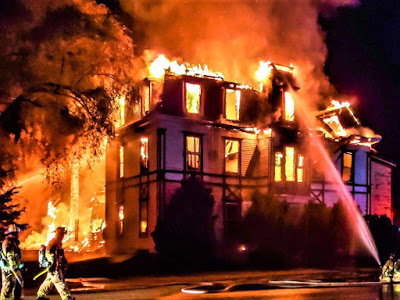 The historic 1885 temple of New Hampshire’s Morrison Lodge 90 in Northwood was completely destroyed by fire on Saturday night. By Sunday morning, the entire 134 year old wooden structure and all of its contents has been reduced to nothing but smoldering rubble.
According to multiple news reports, fighting the fire was hampered the lack of fire hydrants in the surrounding streets. Cause of the four-alarm blaze is not known and is being investigated by fire officials.
Chris Busby, chairman of the communications committee with the Grand Lodge of New Hampshire, released…

read more and watch the pictures at Freemasons for Dummies: