We’ve got no secrets, say Doncaster freemasons at open day 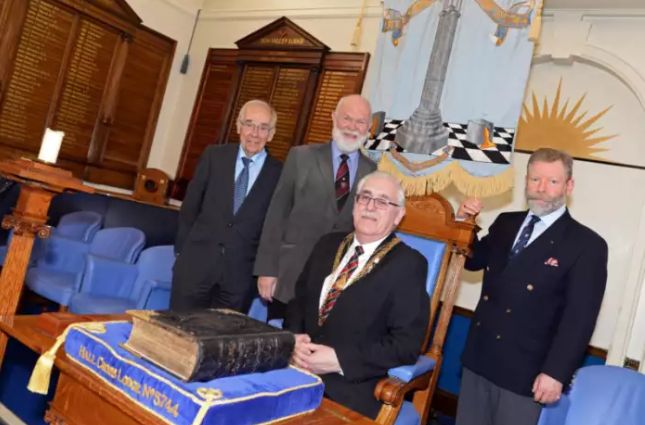 They’ve been in Doncaster for more than 200 years. They have had some of the most famous people in the borough among their membership.

But the borough’s Freemasons reckons they’ve got a poor deal when it comes to image. They are aware of their ‘secret society’ image and reckon that it’s unfair.

And they’re doing something about it. They have just had their first open day for several years at the Masonic Hall on Priory Place, to unveil all their so-called ‘secrets’.

Mason Stuart Grantham: “We’ve opened up the Masonic hall to the public. I don’t think that’s very secretive. We have a bookshop in London where people can buy books with details of all our so called ‘secret’ rituals. That’s not really very secret at all.

“This idea of secrecy is now getting to be a bit frustrating, and that is the main reason why we opened up the masonic hall. We’re thinking we may do it every year. Non masons come here often anyway to take part in functions.”

He believes the ‘secrecy’ image comes from wartime. He says before World War Two the Doncaster masons would hold public processions and even go for picnics in Clumber Park. A picture hangs from the wall of the Masonic Hall of masons in full regalia at a function at the Mansion House in 1909. However he added that it emerged during the war that Hitler was persecuting Freemasons, arresting and murdering them. As a result, they withdrew from the public gaze, a move which he thinks may have led to the reputation for secrecy.

He feels that the reputations has stuck, with some members now declined to reveal their membership because they feel it will be held against them. Stuart does not believes that is fair. Ian Smith, a fellow Doncaster mason added: “Would a secret society have Masonic Hall written on their front door, with the symbols of the organisation, the set square and compass?”

Doncaster has around 300 masons, based across five lodges, all based at the Masonic Hall. The oldest, St George’s Lodge, dates back to 1780, and originally met at the Red Lion on Market Place. The membership grew after…