Recognizing the growing significance of Baltimore City and the increase in membership in that vicinity; in May of 1794 the Grand Lodge of Maryland formally moved to Baltimore. In 1812 the first purpose–built home of the Grand Lodge of Maryland was constructed. Located at the northeast corner of Lexington and St. Paul Streets in Baltimore, it was designed by Maximilian Godefroy, who was a member of the “Loge La Verite” (later renamed King David’s Lodge № 68). A year later he would begin work on the Baltimore Battle Monument located on Calvert Street between Fayette Street and Lexington Avenue.

Between 1822 and the Civil War, the number of Masons in Maryland grew and a number of new lodges were chartered. During the Civil War Maryland found itself in the middle, with pressure from the North to side with the Union while many citizens still harbored sympathies with the South. Ultimately Union troops were stationed in Baltimore and elsewhere in the State to secure Maryland for the Union.

In November of 1866 the Grand Lodge of Maryland, realizing they needed more space, began construction of a new building located at 225 North Charles Street in Baltimore. A year later the building on St. Paul Street was leased to Baltimore City for use as an annex to the court house. Architect Edmund George Lind, a member of Warren Lodge, № 51, was chosen to design the building. President and fellow Mason Andrew Johnson attended and gave a speech at the cornerstone laying on November 20, 1866. In 1869, the Charles Street building was completed.

Up to the advent of World War I, Freemasonry continued to grow in Baltimore. In 1917, at the onset of World War I, Grand Master Thomas J. Shryock ordered all lodges to display the American flag in every lodge room. Lodges were also ordered to open with patriotic ceremonies in which the flag was escorted to a place of honor in the “Masonic East”. The Grand Lodge also contributed to a number of patriotic causes, and the Temple was kept open for the reception of all military personnel who were Masons.

During World War II, the Grand Lodge would again serve as a center for servicemen. Weekly dances were held and after the dance cots for the servicemen to sleep in were provided. Annual quotas for the sale of war bonds were also established for each lodge. Masonic services were established for the welfare of Masons among men in the service. Interest in Masonry, indicated by the increase in membership, continued through the war years.

In 1991, a new building was planned next door to Bonnie Blink (Maryland Masonic Homes) in Cockeysville. The cornerstone laying ceremony was held on October 12, 1991 for the new complex. The 60,000 square feet facility featured a full service commercial kitchen, ballroom, offices, meeting rooms, and a 550–seat auditorium which serves today as the Grand Lodge Room (also known as the Corinthian Room). Completed in 1995 the new building featured painted faux finishes, gold leaf trim, and marble from Zimbabwe, Italy, Spain, and Taiwan, and mosaic floors. In 1996, the New Grand Lodge Building was dedicated. In 1997, Freemason’s Hall, a 26,000 square foot building, was completed. Erected adjacent to the New Grand Lodge, Freemason’s Hall accommodates the Commandery rooms, the Oriental room, library and museum, and Grand Lodge office. 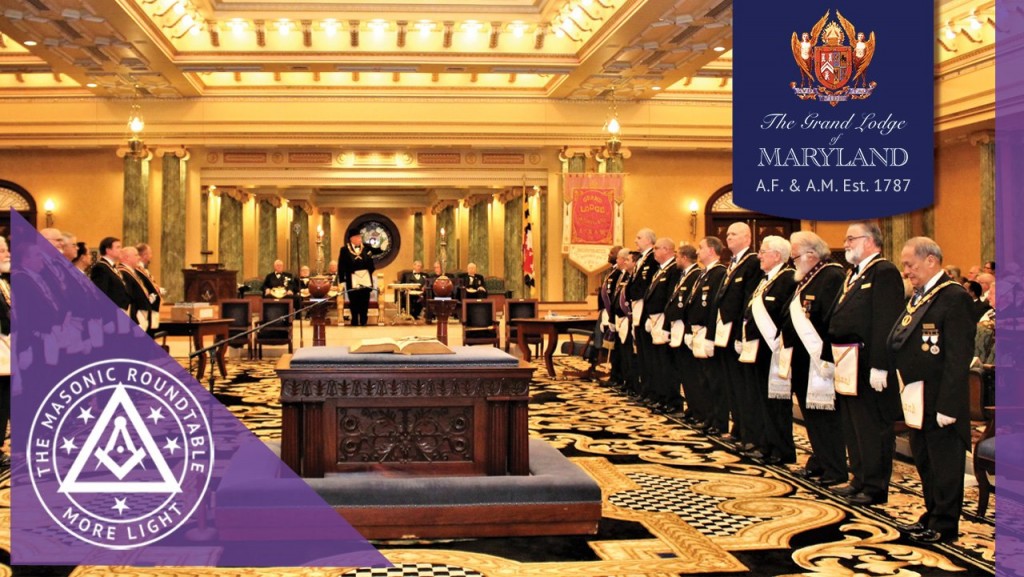 The hosts of The Masonic Roundtable welcome special guest Bro. Ian McIntosh, the Grand Junior Warden of the Grand Lodge […]

© by MarylandFreemasons. We recommend to visit their YouTube channel.