The first known Freemason to live in the “New World” is believed to be John Skene, who was a member of Aberdeen Lodge #1 in Scotland. His name appears as the 27th listed in one of the oldest written records of Freemasons, the Mark Book of Aberdeen Lodge#1 (1670), as “Merchand and Meason”.  Records being vague of the membership to protect trade secrets, John Skene’s name is the first that can be traced to the new world. John Forbes, another Freemason from Aberdeen Lodge #1, moved to Plainfield, New Jersey in 1684 only to go back to Scotland the following year.  Several other Masons from Aberdeen Lodge #1 moved to West Jersey during the same period but most shortly moved back to Scotland.

The passage for many of these Masons was secured by Harrie Elphingson (Master of Aberdeen Lodge #1 at the time of the Mark Book of 1670) as booking agent and under the patronage of the Earl of Perth, himself a Freemason. Skene moved to the Province of West Jersey in 1682. According to The National Society of The Colonial Dames of America (NSCDA), Skene purchased a 300 arce property in 1674 (though there is no evidence that he came to Jersey before 1682) that he named Peachfield. It was in the Second Tenth of the Province, an area that would become Northampton Township, Burlington County, New Jersey (Nov. 6th, 1688) and then Westampton Township, New Jersey (March 6, 1850) near Burlington, New Jersey. Skene served as Deputy Governor of West Jersey from 1684 until 1692. 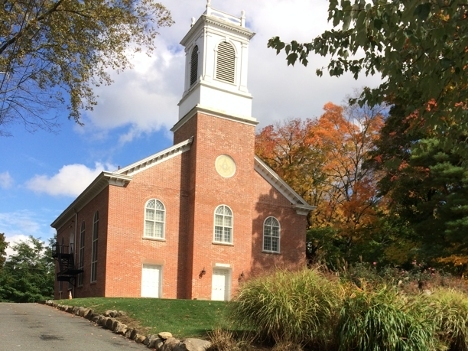