Nineteen men created the Grand Lodge of Masons in New Mexico one mid-summer day in 1877. Eight were official delegates, eleven were noted as “visiting brethren,” involved and prominent members who were present to support the proceedings.

The delegates came from three lodges, two in the north and one in the distant south of the Territory. They represented a total membership of less than 200 Masons whose names appeared on the rolls of the existing lodges chartered by the Grand Lodge of Missouri. Delegates of a fourth lodge had unexpectedly failed to materialize. A fifth lodge had flatly refused to participate in the separation from the mother Grand Lodge—a symptom of the turbulence of local culture and politics of the time, not of any necessarily Masonic complaint.

The Missouri Grand Lodge over the years had provided a District Deputy Grand Master to the Territory, empowered to do about anything he deemed proper. But Missouri was a thousand miles away. These New Mexico Masons felt the need for a Grand Lodge of their own. The problems were so different and the Masons here so few. They wanted an organization dedicated to building lodges and communities in this new country. Yet perhaps the greatest need of these men was friendship with those holding like beliefs.

So the men climbed the steps of Montezuma Lodge in Santa Fe, August 6, 1877. They might have paused, before they entered the lodge room, to look at the Plaza and at the place of the Governors located across a narrow road to the east. The Palace of the Governors was built in 1610. It had been the local seat of government for Spain, then for Mexico, and since 1846, of the United States. A residence and administrative seat, sometimes its three-foot adobe walls had made it a fortress in early Spanish and Mexico history.

On that first day of meetings a committee was named to prepare a constitution and bylaws. The members had done their work ahead of time, because at 7:30 that evening the draft was ready for the official delegates to consider. The remainder of the evening, as well as a couple of hours the next morning, were spent discussing them. The constitution and bylaws, with some amendments, together with seal, were approved. The same seal is still in use today. The title, “The Grand Lodge of Ancient, Free and Accepted Masons of New Mexico” remains unchanged. The titles of the officers remain the same: “Most Worshipful“ for the Grand Master and “Right Worshipful” for all other elected officers.

Discussion of the esoteric work came the second day. More time was spent on this than on the constitution and bylaws. The new Grand Lodge adopted Missouri work, already the official ritual in their lodges, and that same work remained in use for more than half a century. The per capita fee for members was set at one dollar. Committees were appointed, and 200 copies of the proceedings of this initial convention were printed and ordered to be sent to all Grand Lodges in the United States and to every constituent lodge in the jurisdiction.

As New Mexico grew, Masonry came to the emerging communities. The new lodges aided not only their own members, but also helped in building the towns in which they were formed. Among the new lodges were men equal to the strength of the founders, and the lodges provided the friendship men need and the principles they seek to follow in their lives. 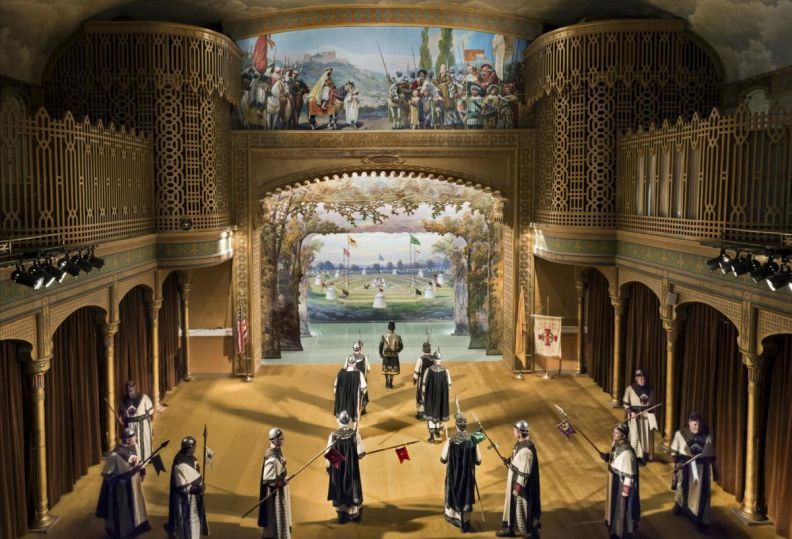 The “Grand Encampment” scene from a Scottish Rite play was re-enacted by members of the Santa Fe chapter for photographer […]
The Grand Lodge of Ancient, Free and Accepted Masons of New Mexico
1638 University Blvd. NE
Albuquerque, NM 87102
www.nmmasons.org
505-243-4931