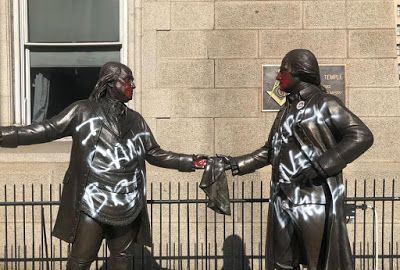 Masonic statues of Benjamin Franklin and George Washington in Philadelphia were vandalized this weekend during protests and violence related to the death of George Floyd in Minnesota. The figures of the two brethren were splattered with red paint and sprayed with slogans.

The display is officially titled, The Bond. The bronze sculptures by artist James West, depicting two of America’s most famous Freemasons, stand on Broad Street in front of the Grand Lodge F&AM of Pennsylvania’s historic Masonic Temple.

An inscription on the 2016 installation describes what it …