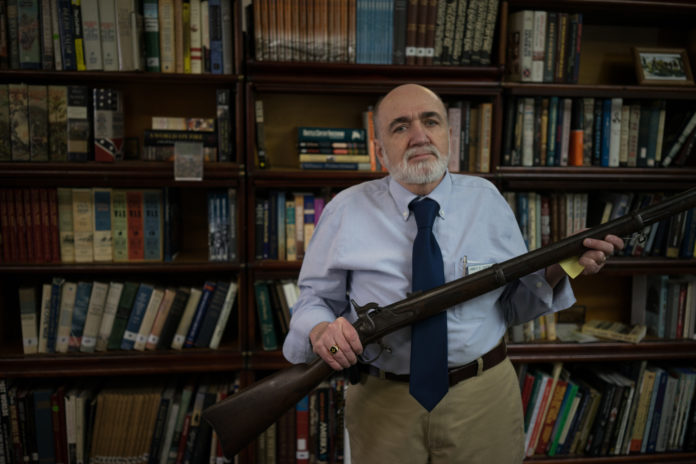 Tucked away on the corner of Chestnut and Congress Street is an unassuming set of glass doors, with a small glass pane overhead reading Portland Masonic Temple. First you have to ring a doorbell. After a minute or two, Jim Dufresne, a Freemason and the founder/director of the Maine Masonic Civil War Library & Museum, will be there to let you in. The elevator that brings you up to the third floor is identical to the elevator installed in the Titanic ocean liner. The entire mechanism is original, installed in 1910 when the building was constructed. Dufresne confidently pilots the cab with a lever.

On the third floor is a large collection of books on the Civil War and several historical exhibitions of Civil War history. Joshua Chamberlain, the colonel of the 20th Maine Volunteer Infantry Regiment and himself a Freemason, is celebrated by several exhibitions for his heroic charge down Little Round Top at the Battle of Gettysburg. The momentum of the entire battle shifted after the 20th Regiment, without any ammunition, routed the Confederate soldiers.

The 54th Massachusetts Regiment, made famous by the movie Glory, is celebrated in an exhibit next to Joshua Chamberlain. This was a heroic African-American regiment that saw extensive combat throughout…

read more at the free press: