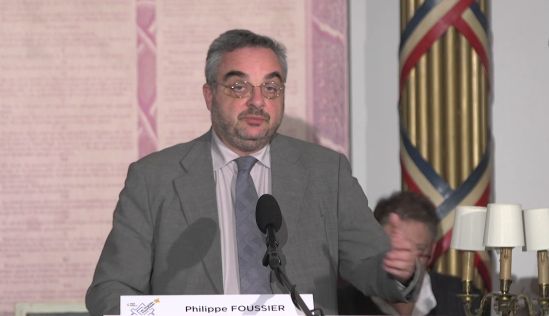 The presented interview was given by the Grand Master of the Grand Orient of France to the editor-in- chief of our website.

FREEMASONRY.network: The Grand Orient of France often adds the Total Freedom of Conscience and the Principle of Laicity mottos to its three pillar ideas, Liberty Equality Fraternity. What makes laicity so important for representatives of this Freemason movement?

Philippe Foussier: The significance of laicity has its roots in French history. Freemasonry in this country had long had many problems with a very active Catholic Church. First lodges on the continent were established in the 1720’s and 1730’s, and the first papal bull condemning Freemasonry was issued as early as 1738. The Vatican has issued many other bulls since, mainly excommunicating Freemasons. French Freemasonry, just like the Republic, had to find its place in the environment of a strong malevolence fuelled by the Church. This happened in many other countries. Thus laicity appeared in the 19 th century as a form of political and legal organization adjusted to the separation of the temporal and spiritual authorities. It should be noted that in the middle of the 18 th century priests, pastors, and even some bishops belonged to our lodges. In its Temples, Freemasonry succeeded in gathering people who outside, in the secular world were separated by everything: noblemen and plebeians, writers and craftsmen… It is still invigorated by the same pursuit of bringing people together.

FREEMASONRY.network: May we conclude that progressive Freemasonry, like the Grand Orient of France, has a different understanding of the essence of Freemasonry than the traditional one associated with UGLE (United Grand Lodge of England), according to which only a believer in God and the immortality of the soul may become a mason?

Philippe Foussier: Of course, it has a different understanding. Resulting from this was the decision from the 1877 Convent, when the Grand Orient of France retracted from its texts any references to the obligation of believing in “revealed truths”, regarding such faith as optional. We have kept the following formula inspired by pastor Frédéric Desmons in our constitution: „Recognizing that all metaphysical concepts belong to a sphere which may only be subject to members’ individual assessment, Freemasonry adopts no dogmas.” Thus the „schism” between adogmatic and liberal Freemasonry on the one hand and the Anglo-Saxon masonry on the other. The Grand Orient of France Museum is currently exhibiting letters sent by Anglo-Saxon Grand Lodges to the Grand Orient after 1877, which rejected its membership to Freemasonry. Since that moment, the adogmatic and liberal Freemasonry was to be regarded as “irregular”.

FREEMASONRY.network: How can progressive Freemasonry support laicity in the society?

Philippe Foussier: Primarily through example. Masonic temples are ideal models of societies. Freemason works gather men and women of very different spiritual, philosophical, cultural views and even various ideological parties, but during meetings they are not bearers of these ideas; they enter into masonry precisely to shed their biases, typical reactions and thinking habits, and not as representatives of any philosophical or spiritual schools. Through emancipatory force, stimulated by Freemasonry, ritual works (regular Freemason meetings) are a great example of what an ideal profane society could be. Moreover masonry, which you described as progressive, can indeed undertake initiatives aiming at explaining what laicity is: total freedom of conscience, separation of spiritual and temporal issues, equality of rights for all – both believers and non-believers.

However, apart from laicity, there is another issue, which should be cared for by Freemasons – universalism inherited from Enlightenment. Since political and religious options exhibit an increasing tendency to differentiate and divide men and women according to their background, colour of their skin or religion, we should emphasise what is common for us all within the human condition. Cultural relativism, existentialism, racism, ethnics, differentials are enemies of the Universal Republic of Freemasons, our utopia, which has existed for three hundred years now. We have always been trying to abolish categories of the secular world, while ideologies separating and dividing human beings multiplied before us.

FREEMASONRY.network: Let us analyze this issue using a specific example which has lately been stirring up strong emotions. How does GODF relate to dilemmas of contemporary western civilisation referring to expectations of some Muslim activists to accommodate special laws of their religion?

Philippe Foussier: The position of the Grand Orient of France Freemasons does not vary depending on which religion is being considered. We have nothing against religions, besides there are many believers among our Lodge members. However, what activates us are precisely cleric claims, aiming at imposing their own norms in a society which includes people of all faiths and many non-believers. The latter are a majority in our country. In France we know that when laicity backs out or is not present enough, cleric pressures advance with full strength. Currently, we are observing a reoccurrence of a context in which religious pressures are unusually strong in the whole social organism, often expressed by fundamentalist and even extremist groups. They may come from Islam, but this is a question of a general rule to maintain distance and preserve this area of laicity, this is what we have in common, unless we allow a bidding of various cults which would try to impose (their own) faith as a norm for all. Today it’s Muslims, but Catholics don’t lag behind. Maybe tomorrow it will be Protestants or Jews. To sum up, everyone is free to practise their faith, but rules of one believer can’t be imposed on the whole society. This law, determined by man, must prevail in the social and institutional organisation. A believer may impose divine law on himself within his own individual journey, but with whole due respect, it can’t in any way turn into a constraint or a standard for other citizens. Secularism, in this context, becomes a shield protecting us from spiritual claims, but also protects each creed from the will of someone wanting to dominate it.

FREEMASONRY.network: Thank you very much for the interview.