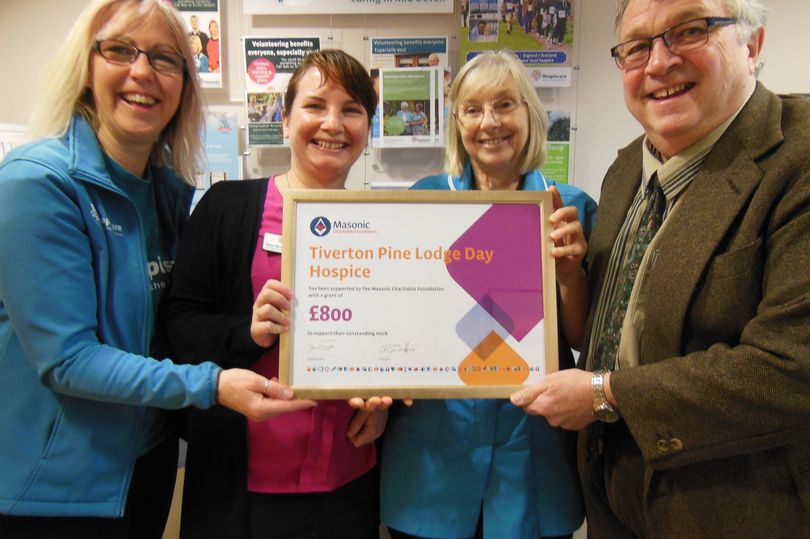 The Masonic Charitable Foundation will this year give grants totalling £600,000 to the 245 hospices in England and Wales

Freemasons have donated hundreds to a Tiverton day centre for the terminally ill.

This year as part of their annual support of hospices throughout the country the Provincial Grand Master of Devonshire Rt. W. Bro. Ian Kingsbury has presented £800 on behalf of the Devonshire Freemasons and the Masonic Charitable Foundation to Denise Hook, Sarah Burns and Chris Webber at Hospiscare’s Pine Lodge Day Hospice in Tiverton.

The Masonic Charitable Foundation will this year give grants totalling £600,000 to the 245 hospices in England and Wales, including nearly £7,000 to seven hospices here in Devon as part of the £12 million total given since 1984. This will include £300,000 which has been distributed amongst the hospices that each receives less than 65 per cent funding by the NHS. A further £300,000 will be provided to the national charity for hospice care, Hospice UK, in a partnership aimed at developing and extending bereavement support services in hospices.

The Freemasons have been long term supporters of Hospiscare’s Pine Lodge, Tiverton and along with individual donations made by many of the 133 Lodges that meet throughout the county and together with the Masonic Charitable foundation have donated nearly £105,000 to Hospiscare.

On receiving the certificate…