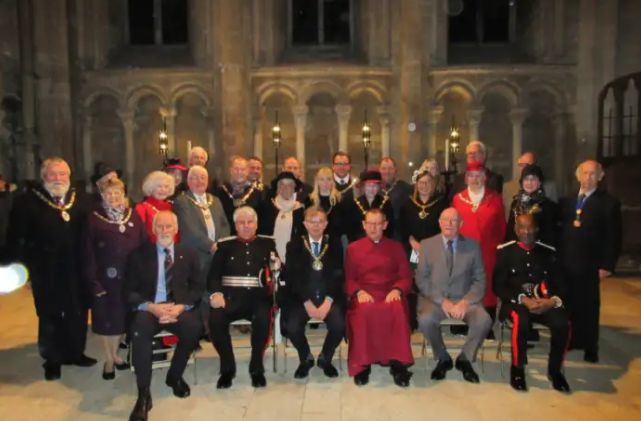 Once again it has been a busy December for Freemasons. Members from the Province of Northamptonshire and Huntingdonshire came together in celebration for a Festival of Lessons and Carols at Peterborough Cathedral, writes Craig Bunday from Peterborough Freemasons.

As the great building celebrates its 900th year, the Provincial Grand Master Max Bayes (pictured front row, second from right), invited The Mayor of Cambridge together with numerous other dignitaries to the service.

Before the service began, a cheque for £2,885 was presented by John Fergusson on behalf of the Anglo Scottish and associated Northampton Lodges to the Three Pillars Feeding The Homeless Charity, which donates hot food, blankets and supplies to the homeless from a van in the car park of The Brewery Tap pub every Tuesday and Thursday evening.

This was raised earlier in the year at the Six Nations Rugby event hosted by a group of Northampton Lodges. Accepting the cheque on behalf of the charity…