The Washington Post: Unlock the secrets of the Freemasons 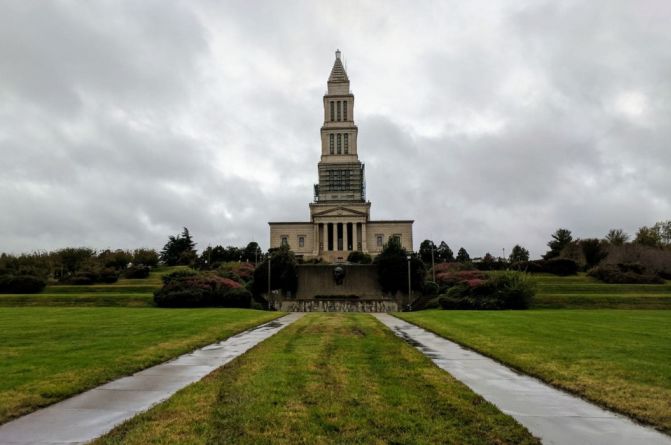 The George Washington Masonic National Memorial looks like a midcentury mid-rise was dropped on the Parthenon. (Sadie Dingfelder/Washington, D.C.)

“Is It True What They Say About Freemasonry?” That question was on my mind even before I saw a book with that title lying open on a table at the George Washington Masonic National Memorial.

This lesser-known monument to Washington and museum of Freemason history is a modest tower in Alexandria — only 333 feet tall compared with the Washington Monument’s 555.

It’s not that old — ground was broken for it in 1922 and it wasn’t completed until the 1970s — and, unlike D.C.’s many free attractions, the Masonic memorial costs $15 to visit, so I wasn’t surprised that I was the only person on the 9:30 a.m. tour one recent Monday.

This sculpture portrays George Washington in his Freemason apron.
“Is it usually pretty quiet here?” I asked the person checking me in, who later turned out to be my tour guide.

“It can get pretty busy in the summer,” he replied. In warm months, busloads of Masons visit the memorial, he said.

“I must admit, I don’t know much about Freemasons,” I said, which prompted my guide to launch into a short history of the…