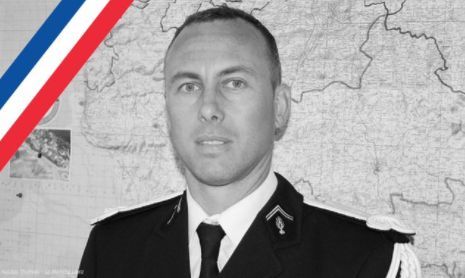 Press release of the Grande Lodge of France from March 24, 2018

With great emotion the Brothers of the Grand Lodge of France found out yesterday about the death of Arnaud Beltrame, a member of the Respectable Lodge Jerome Bonaparte at the East of Rueil-Nanterre.

They are united in the quest to honor this man as a hero who has proven his sense of duty in a unique act of dedication. This act of courage and patriotism allowed to save someone else’s life and reminded that one could never turn his back on a situation of threat of barbarism.

All thoughts of our Brothers accompany his family at this moment of great sadness.

The Grand Lodge of France greets the representatives of the Republic’s law enforcement; those who are fighting against any displays of xenophobia and terrorism. In essence, with all forms of rejecting others – our Brothers and Sisters in Humanity.

Filip Charuel
Grand Master of the Grand Lodge of France

The French police officer who was shot after he swapped himself for a hostage during an Isis-inspired terror attack on a supermarket has died.
Arnaud Beltrame, 44, took the place of a woman being held captive by suspect Redouane Lakdim at the Super U store in Trebes in the south of France.
“He fell as a hero, giving up his life to halt the murderous outfit of a jihadist terrorist,” President Emmanuel Macron said in a statement on Saturday morning.

(the source/read more : The Independent)