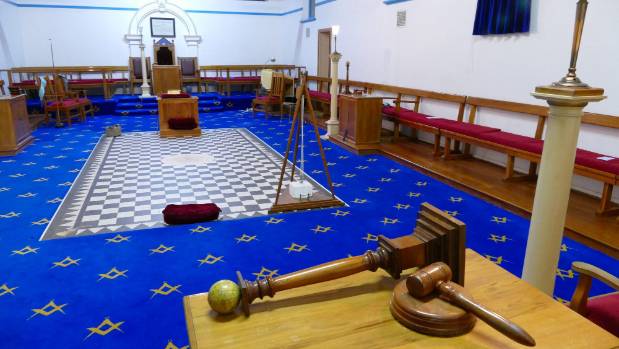 Inside the temple at the Mokoreta Lodge No 63 hall in Wyndham.

A rule in the constitution of New Zealand freemasonry has halted plans for the Mokoreta branch to gift its hall to the Wyndham and Districts Historical Society.

The society needs a new building for its museum as its current site is an earthquake risk and not open to the public. A rebuild on existing land is also an option being considered by the society.

Mokoreta Lodge No 63 secretary Jimmy Walker said members wanted to gift the hall to the society for a transaction fee of $1 and then operate the branch form the Masonic Lodge in Invercargill.

“That’s what we want to do,” Walker said.

“We want to help the museum … do something for the community. If it doesn’t happen we’ll stay.”

New Zealand freemasonry rules state, if a lodge intends moving premises, its building must be sold and all money from the sale given to The Grand Lodge of New Zealand.

The hall, owned by the Mokoreta Lodge, has been listed for sale with Southern Wide Real Estate.

A rare feature of the lodge’s temple is a square area made of small tiles. The square is called a pavement and members stand on…